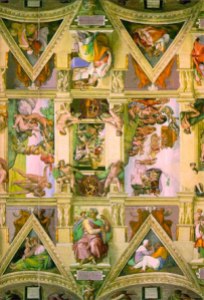 Once upon a time there was a fantastic artist named Michelangelo who loved to sculpt. In 1508, he was busy at work creating a masterpiece marble tomb for Pope Julius II. When the pope asked Michelangelo to stop his work on the tomb and create the Sistine Chapel ceiling. He didn’t want to paint! He loved to sculpt and he wasn’t familiar with the current fresco technique. But….you didn’t just tell the pope, ‘no’ so he stopped his work on the tomb and set off on the 4 year project – Sistine Chapel ceiling.

Michelangelo’s Revolutionary Painting Technique: He was given a very short time frame.

The figures on the ceiling are up to 13 feet tall so Michelangelo sketched them all first. The technique of the day was to sketch, then poke holes along the edges of the drawing.  Next, using charcoal filled bags, the charcoal was patted against the holes which left an outline which the painter followed.

The pope not only made Michelangelo do something he didn’t want to do, but he also didn’t give him enough time to complete the project!! Michelangelo had to get creative! He came up with a new way of outlining the figures before painting. He used an early version of an exacto knife to outline. That cut out a step and allowed Michelangelo to finish in record time! Bravo Michelangelo!

Watch the video with more details of how Michelangelo’s genius arrived on the ceiling of the Sistine Chapel!

Michelangelo was a famous sculptor at the time because he had already created his wonderful sculptures of David and Pieta. So why was he chosen to paint such an important work? Why wasn’t a famous painter of the time chosen? Funny you should ask!

There were two very famous artists at the time: Raphael, a painter, and Bramante, an architect. They weren’t exactly friends but they had a common thought – they were both terrible jealous of Michelangelo. So, the decided to work together to get Michelangelo this famous painting gig. They figured that he would fall flat on his face off the scaffolding and would be laughed off the Italian art scene. Definitely a case of be careful what you wish for. Michelangelo was given the famous painting gig and turned out to be more of an artist than anyone figured he could be. The rest…is history.

He painted standing up! That’s right he did NOT lay on his back as so many have heard. He stood daily for 4 years holding a paint brush above his head. That makes my neck hurt just thinking about it! Were there chiropractors during the renaissance?

When it is time to elect a new pope, this room is where the papal conclave gathers to vote.

Originally the ceiling was painted blue with stars on it.

Don’t shy away from taking the kids to see these marvelous works of art. Michelangelo is a artist beyond all others and these famous works of art are woven into our cultural fabric. How many times have you see a parody of the section called “Creation of Adam” that shows two fingers touching of God and Adam? Raise global citizens and give them an educational background that includes world class art!

A little preparation goes a long way. Kids who have some background information on what they will see are more curious and more interested in every way. Just imagine how bored you would be if you walked in and had no idea why the Vatican was special. Would it seem like a cool place if you had no idea who painted it? Children are the same.

Michelangelo is a really colorful artist and it is easy to get the kids interested in him! Use books like these. Read about the interesting person himself and take a glance at the art. It will be so much more meaning when you arrive!

Famous Children : Michelangelo by Tony Hart Only 24 pages long for kids ages 5 and up. Some of the very best information you can get on a new topic comes from children’s books. It gives you  the basics in simple to understand language. You can all learn from it!

This series from Mike Venezia is one of my favorites. He writes on LOTS of artists!

Getting to Know the World’s Greatest Artists by Mike Venezia Love this series and so will you! I have used this for years in elementary schools and again with my own children. Consider this Cliff Notes for yourself, too.

Michelangelo for Kids: His Life and Ideas with 21 activities by Simonetta Carr is a fantastic resource. This book is a more detail and includes some cool activities for you and the kids! Give the background knowledge they need to make the trip even more interesting for the whole family. Great to build upon the books above for younger kiddos. Written for kids aged 9 and up.

Be sure to take your Vatican City travel guide for the kids!

Italy is a fantastic family destination!